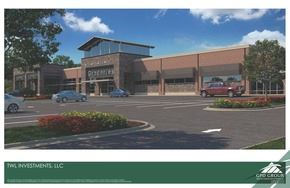 7.84-acre site located at the southwest corner of Massillon and Graybill Roads.

The approved concept plan consisted of a “fast-food” restaurant and a “food/retail” facility along the Massillon Road frontage of the site with a senior living complex (Echelon Green) in the western half of the site, abutting the Green Highlands allotment to the west.  The final site plan now moving forward for review involves the development of the retail portion of the project (i.e. Phase I). While the applicant has reversed the placement of the two facilities along the frontage, the current plan would meet the original intent of the concept plan.

The plan shows the proposed retail plaza at the south end and a future fast food restaurant directly north.  The developer plans to rough grade the future site at this time until plans are finalized for that project, which will require review through the formal review process.  The plan also shows the outline of the Echelon facility in the western portion of the site, which is based on the approved concept plan (Phase II).  Changes to that portion of the project will need to return for an amended concept plan review.

Building elevations and color renderings are provided for the overall 80’ x 123.4’ (9,876 SF) retail plaza, which would be designed to accommodate six (6) tenant spaces of approximately 1,646 SF each.  Maximum building height shown would be 20’-4”, which complies.  The building would feature a mix of brick and stone Nichiha panels with chiseled sill and sandstone accent bands. Each front façade would feature varying height parapet walls to improve the aesthetics of the project. Other accents would include Nichiha Vintagewood, metal canopies, decorative wall sconces, and large aluminum-framed storefront windows. Material colors would range from crimson to beiges (specs are provided for review).  All facades would exceed the 70% primary material average on the principal façade and 60% average on non-principal facades.  All building setbacks would comply and the rear of the building would exceed the 390’ minimum distance from the west property line of the District (and east allotment line of Green Highlands), as stipulated in City Council’s approval of this PD District (429’ shown).  There are no outdoor patios/dining areas associated with this project.  It was also stipulated that no bar or tavern shall be located on the property.